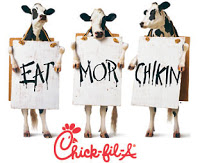 In a struggling economy, there are some companies that succeed. Offer a good product and a good price, and value-conscious consumers will reward you.

Chick-fil-A’s record sales performance marked the chain’s 41st consecutive year of systemwide sales gains – a streak that the chain has sustained since its inception in 1967 – and its 16th straight year of double-digit sales growth.

“Chick-fil-A was able to endure a number of challenges that could have been detrimental to any other chain, including targeted product competition among our quick-service rivals and a challenging economic environment, but our restaurant operators and team members remained committed to excellence which resulted in another solid sales year,” said Chick-fil-A president and COO Dan T. Cathy.