Posted By: Albert Nurickon: May 05, 2009In: Uncategorized1 Comment
Print Email

There’s a new spot opening up in Vintage Park (Hwy 249 at Louetta) that we’re looking forward to checking out. Called Peli Peli, it’s an upscale casual restaurant with cuisine that looks very interesting.

Peli Peli (also known as Piri Piri or Peri Peri), which means Bird’s-Eye Chili, is a spice found by the Portuguese in the 15th Century on the plains of Southern Africa. The spice rapidly became popular when used to prepare sauces and marinades for Portuguese and African foods. The Bird’s-Eye Chili is the cornerstone spice for the cuisine at Peli Peli.

The chef behind this new spot is Paul Friedman, the man who create Paul’s Pizza, the popular local pizza chain with some very interesting recipes. Chef Paul has had over 35 years of experience in the restaurant industry, having owned and operated successful restaurant concepts in South Africa and Germany as well as Paul’s Pizza.

They’re planning a grand opening event with a Live Jazz Brunch on Mother’s Day (May 10) from 11 to 3. 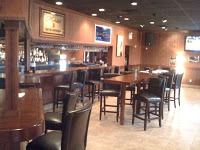 Uncategorized Something Different in the Woodlands – Ambie…
1