Gozzetti’s – An Independent Pizzaria in the Woodlands

Posted By: Albert Nurickon: May 19, 2010In: Uncategorized5 Comments
Print Email

We’ve lived in the Woodlands for about five years now, and have watched the restaurant here scene steadily grow and improve.  No longer just a sleepy little suburb, the 80,000+ residents of the Woodlands can enjoy dining out at some of the best restaurants in the Houston area.  From high-end establishments like Tesars and Jasper’s, to small mom-and-pop restaurants like Eden Cafe, Capri, and Mel’s, the Woodlands area has something for everyone.

One particular area of interest is pizza.  Houston isn’t a great pizza town (Sorry, Star Pizza) and many folks believe the best pizza can be found in the suburbs, particularly Sugar Land and the Woodlands.  You’ll find great local spots like Brother’s Pizza and Pizza Tonight, and bigger chains like Russo’s and the stellar Grimaldi’s (from Brooklyn.) 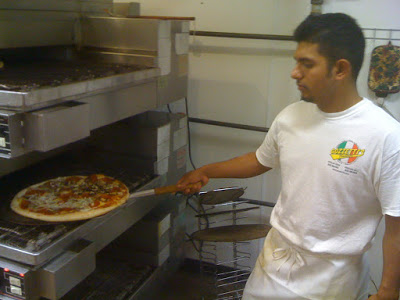 We’d been hearing good things about a small pizza place that had quietly opened two locations in the Woodlands.  When one of our trusted sources said that the pizza was worth trying, we headed out to investigate.

We drove west from our central Woodlands headquarters to the Sterling Ridge location of Gozzetti’s.  Located in the well-hidden Marcel Crossing Shopping Center, Gozzetti’s is a small, tidy spot with both indoor and outdoor seating.  We were immediately greeted by the gregarious staff, and we learned a little about their story.

Gozzetti’s is owned by two families who moved to the Woodlands from New Jersey.  Unable to find the kind of pizza they were accustomed to in their home state, they decided to make their own, using ingredients imported from the East Coast. 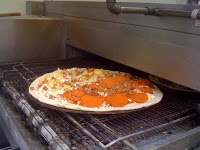 Gozzetti’s formula begins with a thin, hand-tossed crust that’s made in-house.  And these crusts are big – a large at Gozzetti’s is 24″.  (That’s not a typo).  Next is the specially blended sauce, spread sparingly, as they do on the east coast.  Above that are a mixture of imported (from NJ) cheeses, and the meat and veggie toppings.

The result goes into a conventional conveyor oven.  And what comes out is the reason we’re here.  From this unremarkable oven emerges a pizza that’s among the best in the Houston area – thin, crunchy/chewy, and loaded with flavor.  Gozzetti’s gets the foundation right – the thin, tasty crust, the right amount of tangy sauce, and a rich, gooey cheese layer supports the top quality toppings.  We sampled the traditional pepperoni (large diameter, similar to what they use at Ciao Bello) and the untraditional bacon and pineapple.  All were delicious. 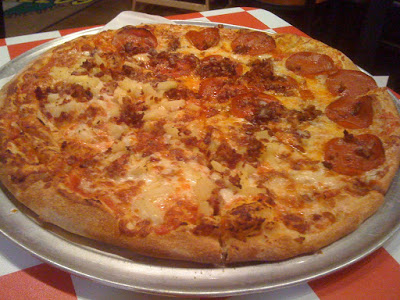 We’ve often bemoaned the lack of great pizza in Houston.  Thanks to places like Gozzetti’s and Grimaldi’s, you don’t have to go far to find great pizza in the Woodlands.  And for you inside-the-loop folks, it’s a nice drive out on a sunny day.

Gozzetti’s – An Independent Pizzaria in the Woodlands

by Albert Nurick time to read: 2 min
Uncategorized Congratulations Are In Order 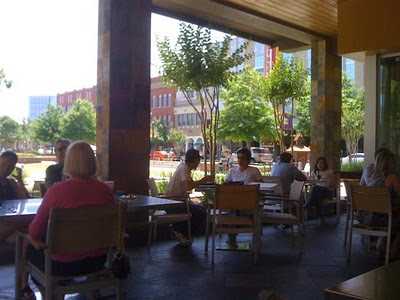