The New Generation of Vallone – We Visit Caffe Bello

UPDATE: Caffe Bello closed in the Spring of 2011.

I make no bones about it – I’m a big fan of Tony Vallone, and I think his restaurants set the standard that few others in town can even approach.  From the food to the service to the setting, Tony and his staff show an attention to detail that is rare in the restaurant business. 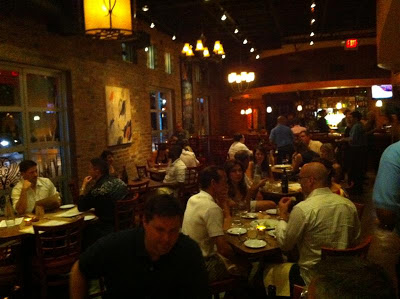 (The Vallones are also clients of mine.  Ever since my friend Jack Tyler introduced me to Tony almost a decade ago, my company has created all of the web sites for Vallone restaurants, from the original pre-Landry’s Grotto to Ciao Bello, and of course for his flagship, Tony’s.  And as a foodie, they are the best client I could ever have, because every meeting involves wonderful food, and the opportunity to learn from Tony, his son Jeff, Chef Bruce McMillian, their young front-of-the-house wizard Scott Sulma, and the rest of their team of extraordinary minds.  It’s like being a baseball fan, and being asked to create something for the Yankees.)

So I was very happy to hear from Tony and his son Jeff about the new concept for a restaurant they were creating in Montrose, to be called Caffe Bello.  The excitement in Tony’s voice was palpable.  Caffe Bello really was to be something different, targeted at a young, hip, Montrose crowd, while still maintaining the signature Vallone touches that lift their restaurants above the ordinary.  Most restaurateurs who had 45 years under their belts would be coasting, but Tony was visibly excited by the challenge of bringing his art to a whole new generation of patrons.

Caffe Bello is an Italian restaurant, of course.  That’s what the Vallones do best.  But what would Tony bring to Montrose, the epicenter of hip and cool?  Driving down lower Westheimer one encounters a veritable who’s who of hot, trendy restaurants, with places like Feast, Indika, and Dolce Vita each doing a brisk business.  In this setting that craves the new and different, how would Houston’s iconic establishment restaurateur create a restaurant to surprise and delight this finicky neighborhood?

The answer: Tony would do this the way he does everything else:  By adapting to his customers, and creating for them something unique.  And exceeding expectations, which are already high, given the Vallone name attached to the project.

Upon entering Caffe Bello on its first Friday night, we were surprised by how different the space feels.  This isn’t Tony’s with its soaring ceilings and world-class art grabbing your eye.  Nor was it Amici, feeling upscale and casual and filled with families and couples on dates.  This was edgy — a long narrow room along Westhimer, exposed brick, no tablecloths.  It’s fairly dark.  A bar hugs one end of the room.  It felt more like the Village or SoHo in Manhattan than near downtown Houston.

One new Vallone trademark grabbed us immediately – stunning abstract works by John Palmer.  Palmer’s canvasses captured the edgy energy of the room, and reflected it back.

The edge extends into the back of the house, with chef Michael Dei Maggi, formerly of Max’s Wine Dive and the Rockwood Room helming the kitchen.  Chef Dei Maggi is the kind of chef you’d never picture working with Tony Vallone – sporting numerous tatoos that speak volumes about his cutting edge sensibilities.  But a look through Dei Maggi’s previous gigs shows the sort of creative flair that Montrose craves – he’s the type of chef who’s looking forward, never backward.  We’ve been a fan of Chef Dei Maggi’s work, and were looking forward to seeing how he and Tony would work together.

The youth isn’t just in the kitchen.  Scott Sulma is a partner in this project.  For those who don’t know him, Scott is the twentysomething general manager of Tony’s, the Vallone’s flagship restaurant and considered by many to be the finest restaurant in Texas.  Scott brings an intuitive grasp of hospitality and organization to Caffe Bello; he is simply unflappable in very demanding situations, and the fact that a man in his 20’s can rise so high in the Vallone organization is testament to his ability.

We drove into Montrose from the Woodlands, and handed off our car to the valet.  After a very brief wait, we were seated.  The restaurant was going through its soft opening, and hadn’t advertised its presence, but the buzz had already started in Montrose, and the dining room was full.  It turned out that we were at a table next to Tony, his wife Donna, and their daughter Lauri, there to enjoy dinner and make sure the new store was up to speed.

We perused menu, and were immediately taken by the tightly edited menu of unique offerings.  A variety of pizzetta (small, individual pizzas), none of which looked familiar to us.  A meatball burger.  A chicken-fried sirloin.  And a variety of other dishes you’d never seen on the menu at Tony’s, Ciao Bello or Amici.

We couldn’t wait to order.

First came the bread service – instead of the expected basket, it was placed on a sheet of brown paper, and casually arranged.  Of course, being a Vallone joint, the casual arrangement somehow looked effortlessly artistic. 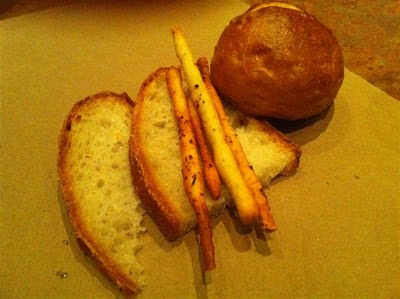 The breads were warm, housemade, and had surprisingly complex flavors – we fought over the dense, chewy, sweet roll, and fortunately more were quickly delivered when ours was devoured.

We jumped around the menu, ordering items that looked most fascinating.  First up was a pizzetta – one with bresaola (thinly sliced cured beef) pear, taleggio and Italian truffle honey. 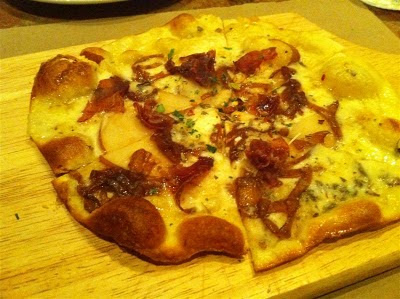 Rarely am I a fan of what I call “designer” pizza – I am a devoted pepperoni guy.  But this pizza was outstanding – bubbly, crispy, slightly sweet crust, dense, chewy, smoky beef, creamy and herby white cheese, and the tangy bite of the pears made this a dish we’ll be reordering as soon as possible.  Even my lovely bride, who is not a terribly adventurous diner, found herself drawn to this creation.  A pity, because that meant I had to share it with her.  But love conquered… at least this time.

While I dolefully watched my wife enjoy her last slice of pizza, Tony caught my eye from the next table.  He handed me a plate, and on that plate was a sandwich.  As was the theme for the evening, it was no ordinary sandwich. 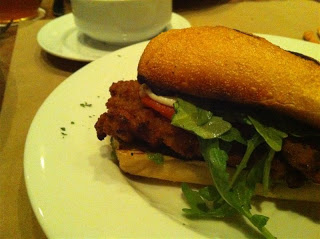 First, half of it was missing, and Tony’s wry smile let me know who had tested it.  Second, it was a veal cutlet grinder, containing a gently breaded slice of veal, some fresh mozzarella, roasted peppers and greens, and it was served on a housemade ciabatta bun.  The bite of the peppers, the smooth, lush cream of the mozzarella, and the mild beefy flavor of the veal played together like a well-practiced band, with each ingredient playing well on its own, but the combination being so much more than the sum of the parts.

This demostrated something I learned years ago – if Tony or Jeff suggests something, do not pass it up.  And if Tony orders something for himself, prepare to be wowed.

Tony was very interested to know what I thought of the dish, and he was very happy when I raved about it.  His interest caught me off guard when he asked for my feedback the first time, many years ago.  The man is a true master of the culinary arts, yet his humility is a guiding force… he really wants to know what makes each and every guest happy, and he will figure out how to give it to them.  He’s built a very successful business doing so, and his patrons display the sort of loyalty that is unheard of in the restaurant industry.  There’s a reason for this.

Back to the food.  Next out of the kitchen were the diver scallops saltimbocca. 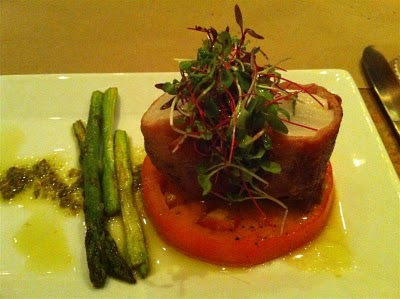 We’ve always enjoyed Tony’s seafood offerings, but this was something totally different.  Rich, silky, just-past-al dente scallops were blanketed in thick-sliced, earthy prosciutto, and a sharp, sour caper agresto added a bold note.  Served with tomato and grilled asparagus, this small plate demonstrated convincingly that combining the deft Vallone approach with daring Dei Maggi strokes was going to lead us in some deliciously unexpected directions.

After a brief break, it was time for the entree.  I love chicken-fried steaks, and I honestly never expected to see one served at a Vallone place.  But here it is: 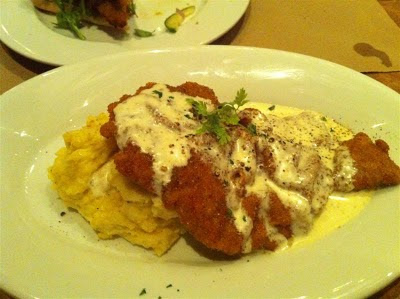 Unsurprisingly, this is not a typical chicken-fried steak.  Tender sirloin was hand-breaded, and topped with truffle cream gravy – the mild, soulful truffles were a nice bonus.  The accompaniment for this dish was the side of whipped potatoes, highlighted with reggiano cheese.  We’ve never before encountered a chicken-fried steak that spoke to us with an Italian accent, but we’re glad we tried this one.  The quality of the meat alone made a huge difference, and adding the Italian accent elevated this dish to new heights.

Around this time Jeff Vallone wandered over, and said we had to try something.  In this case, “something” proved to be their orecchiette pasta, a simple but unique dish composed of pasta, rapini, grape tomatoes, and breadcrumbs. 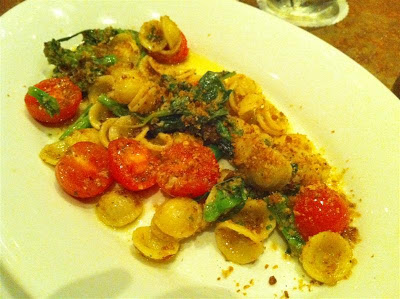 Breadcrumbs?  The breadcrumbs were crunchy, and added a delightfully new texture to the slightly tart pasta dish, and the rapini added an assertive bitterness that was deftly offset by the acid from the tomatoes.  Again, the rule of thumb:  If Tony or Jeff suggests something, do not pass it up.

At this point, I was so full as to nearly be in pain, but I’ve learned that I cannot bring my bride or our daughter to a Vallone restaurant without ordering dessert.  Thankfully, they were doing the selecting at this point, so in my food-induced haze I sat back and watched what came out:  First were petite, housemade ice cream sandwiches. 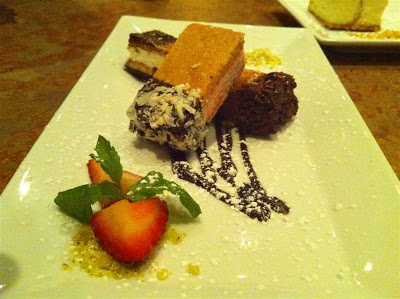 Both the cookies and the ice cream were housemade; we were particularly taken with the strawberry, which was lusciously creamy and studded with pea-sized chunks of fresh strawberry.

The end of the meal was a staple of any Vallone dessert menu – Elizabeth’s cheesecake.  Finally we’d get something that was familiar.  Or so I thought. 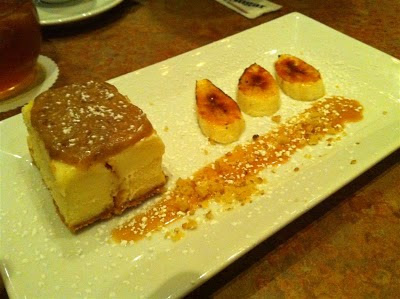 This was a remarkable juxtaposition of the familiar with the new – the silky, lutescent filling and the delightfully crispy crust were present and accounted for, but the serving was a bold rectangle, the topping was thick, rich caramel sprinkled with nuts, lightly caramelized bananas were sliced on the side, and a smear of delicate, ambrisial butterscotch sauce punctuated the service.  Apparently even family icons are not safe from the twists that come forth from Chef Dei Maggi’s mind.

This remarkable meal speaks volumes about how well things can turn out when you assemble a team with culinary talent and let them do what they do best.  And we were again amazed (although by now we should expect it) that a restaurateur who’s been successful for over four decades can create a new, cutting edge restaurant, and delight an audience that probably wasn’t born when he opened his first location.

I’ve been accused more than once of being a fan of Tony Vallone’s, and I cannot dispute this.  Tony is the textbook definition of a master restaurateur:  His restaurants are considered to be among the very best anywhere, and he’s been keeping them there for over four decades.

Caffe Bello shows that the master hasn’t lost his touch, and that he’s assembled a team that can translate the legendary Vallone experience into one that will be embraced by a cutting-edge audience.  I think that sums up Tony’s philosophy:

The food will always be changing, but excellence never goes out of style.

The New Generation of Vallone – We Visit Caffe Bello 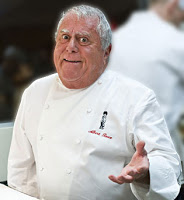