We’ve been keeping up with a new project opening downtown, and were excited to be invited for the Friends and Family preview.  Called Samba Grille, it’s a Brazilian restaurant offering rodizio service, and it’s located in the center of the Theater District in the Bayou Place center. 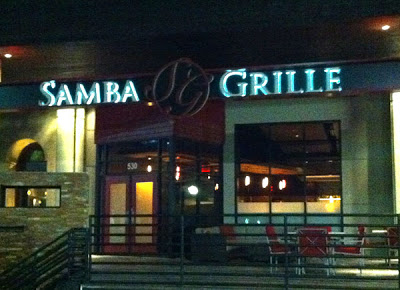 Walking in, we were immediately taken by the swank surroundings.  The Texas Avenue location is sleek and sophisticated, yet the warm Latin vibe makes it very inviting.  A well-equipped bar hugs the back wall of the room, and the tables and booths are placed in a multi-level arrangement, adding to the sense of intimacy and romance.  This is without a doubt a romantic restaurant – we expect it to be a very popular date destination. 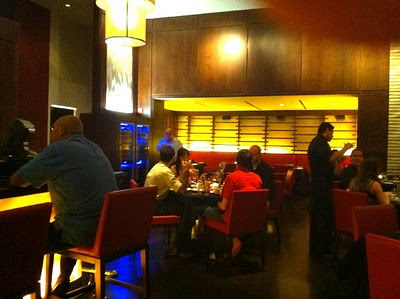 (The only negative about the intimate, romantic setting is that natural light photos with the iPhone 4 didn’t come out well.  Thus there aren’t any food photos in this article. The paparazzi should find this frustrating, too.)

Lead by partners Nathan Ketcham and Estella Erdmann, the team behind Samba Grille is a strong one.  Chef Cesar Rodriguez is at the helm in the kitchen, and his experience with the Vallone organization has translated into the kind of smooth consistency that you rarely see in a new establishment.  Sommelier Marc Borel, previously with 13 Celsius, brings his studied approach to a carefully edited wine list, and he’s fully up to the challenge of suggesting pairings with the broad rodizio and composed offerings coming out of Chef Rodriguez’s kitchen.

Let’s look at what the kitchen brought forth.  (And remember, Samba hasn’t even had its soft opening – the kitchen is just sorting things out at this point.)

First out was a Caesar salad, and it was a very auspicious start.  The romaine lettuce was deftly coated with a tart, briny Caesar dressing, sharp with plenty of bite and anchovy flavor.  Large, thin shavings of fresh Parmigiano-Reggiano cheese completed the salad.  It was one of the best Caesar’s we’ve had in Houston.

Next up was the vegetable plate, an artistically composed arrangement of flash-fried yucca, sauteed Peppadew peppers, sweet plantains, and thin green beans.  The careful handling exhibited by these veggies was impressive; the yucca was crispy on the outside yet fluffy and tender within; the Peppadews were sweetly spicy and not overpowering.  The plantains were rich and flavorful, and we dabbed a bit of the house chimmi-churri sauce on top.  The green beans were al dente and had a nice snap.

But the centerpiece of a rodizio is the meat, and Samba rolled out an impressive variety.  The presentation is dramatic – servers circulate with large swords impaling the savory chunks of meat and seafood, slicing off a portion as requested.  The servers displayed an uncanny ability to deliver the precise degree of doneness I requested, and seemed to magically appear just as I’d finished the previous portion.

The bacon-wrapped filet was a walnut-sized nugget of bacon-wrapped beef, deliciously smoky and peppery. The dark, earthy-sweet flavor of the bacon infused the filet, making for a very satisfying start.

Next up was the house-special sirloin.  This was a standout among the very good offerings – a rich, robust, beefy swagger, sliced very thin, yet were still juicy and tender.  We came back for seconds (and thirds) on this one.

Broiled shrimp came out next.  The large shrimp were nicely firm and cooked to just the right point; the delicate buttery herbal baste completed the preparation.

Large, baseball-sized chunks of filet mignon came out next.  Cooked to a beautiful medium rare, the flavor was gentle and delicate, a skillful counterpoint to the bold flavors of many of the other beef servings.

A real surprise were the bacon-wrapped chicken breasts.  A sweetly tangy apple flavor infused the chicken (no doubt the result of some slow, careful brining) and offset the peppery bacon.  Another dish we could have eaten all night.

Another surprise were the pork ribs, atypical for rodizio service.  Gently grilled, the dense, chewy pork provided a textural contrast to the tender, silky beef.

Speaking of silky, our final offering of flank steak was very unusual.  Prepared on the rare side of medium rare, it was almost supernaturally tender and luscious.  This cut of beef was even richer than the filet, and had a smooth mouthfeel that was totally unexpected.  We suspect some very artful grillwork here.

There were other rodizio offerings, but at this point were were simply too full to sample them.  I blame multiple samples of the sirloin; it was something we kept eating more of.

Samba’s grand opening is auspiciously scheduled for Brazil’s Independence Day, September 7.  Considering how well things were running during this sneak preview,  I have a feeling that it’s going to be an event to remember.  We’ll see you there.

(For another early look at Samba Grille, check out Phaedra Cook’s article on Houston Food Adventures.) 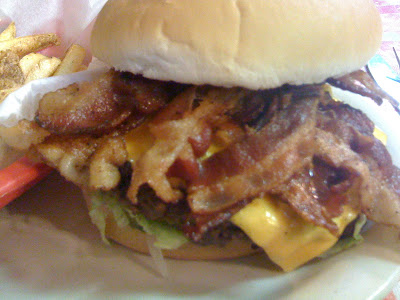