When chef Philippe Schmit left the Hotel Derek’s hot bistro moderne, we joined Houston’s foodie community in wondering where he would be cooking next.  Buzz about a new restaurant on Post Oak was heard, but the rumored opening date came and went.  But restaurant openings are frequently delayed, so we didn’t give up hope.

Last week we were excited to hear that Philippe Restaurant + Lounge had opened next door to Robert del Grande’s swank newish RDG, and couldn’t wait to give it a shot.  When a client meeting got pushed back, the opportunity arose for lunch on their first day of lunch service.  We were there in a flash, and here are our impressions.

First, the location.  BLVD place on Post Oak.  Literally a stone’s throw from RDG.  Valet parking, or self-parking behind the building.  Inside is a very cool lounge area downstairs; the restaurant proper is up a long, dramatic staircase.  The dining room is sleek but warm; the fabrics chosen keep the space from feeling sterile, and floor-to-ceiling windows offer a view of Post Oak and the buildings across the street. 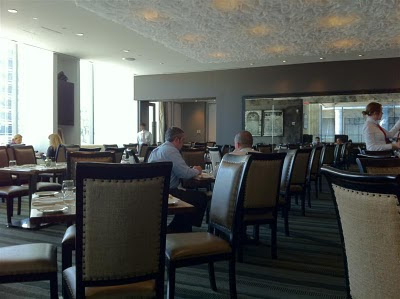 Upon being seated, we were faced with something a bit playful and a bit peculiar.  Paper placemats with clever quotations… from Chef Philippe Schmit. 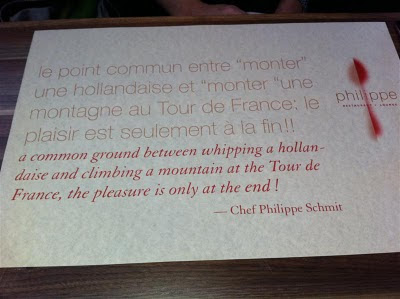 We perused the brand-new lunch menu, and our first reaction was that it wasn’t terribly French.  Salads, pizzas, sandwiches, seafood, pasta, and meats were all represented.  We zeroed in on their bacon cheeseburger, served on a house-made brioche bun.  Ordering it medium rare wasn’t a problem.  We also wanted to sample a salad, and the Texas caesar, with BBQ-brushed skirt steak was a tempting, if non-French, choice.

The burger was a thick hand-formed patty, served on the aforementioned brioche bun, which had been griddled perhaps a touch too enthusiastically.  It was smothered in melted and re-congealed cheese, then crowned with some nicely peppered, thick-cut bacon.  It was dressed with thinly-sliced housemade pickles and butter lettuce. 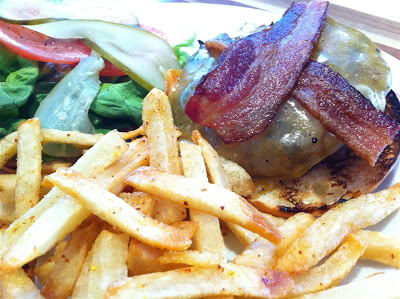 There is much to like here – good quality beef, a deft touch with the seasonings, and a nice, dense housemade bun.  The patty was medium-rare, as requested. 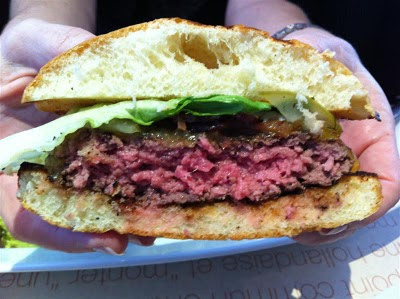 But there were some missteps.  The beef, while tasty, was perhaps too high of grade; it was only minimally oozy, which is rare (no pun intended) in a medium-rare burger.  And the cheese was obviously melted at one point, but had congealed into a firm blanket by the time the burger reached our table.  Regardless of the missteps, this was a solid burger; tasty and featuring top quality ingredients.  We can’t expect perfection out of a brand-new kitchen, and we expect it to become even better over time.

Next up was the salad, and it really grabbed our attention.  It was served on one of the longest plates we’ve ever seen; it literally spanned beyond my shoulders, and the salad was artfully arranged upon it. 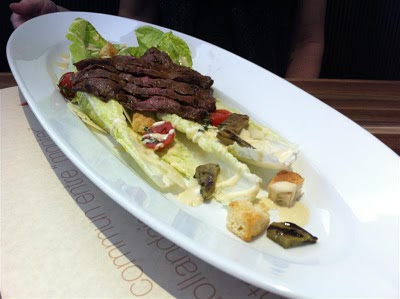 The bits of romaine lettuce were drizzled with the mild caesar dressing, as were the croutons, tomatos, and bits of what we found out to be grilled cactus.  Our take on this dish was that it was lovely, but not particularly flavorful.  The extremely tender skirt steak tasted as if it had been grilled, not barbecued, and the expected smokiness was nowhere to be found.  The caesar dressing was also mild, and we admit to being perplexed by the inclusion of tomatoes on a caesar salad.  To be clear, it was a very tasty salad, just not what we were expecting from the description on the menu.

We saw hints of greatness on the plate at Philippe, and we hope the kitchen hits its stride in the coming months.  Considering the ample talent of the executive chef, we don’t expect a long wait. 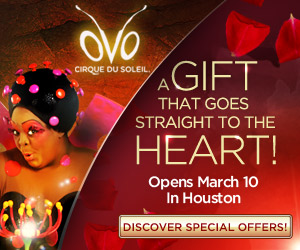 Uncategorized Congratulations to our Winner 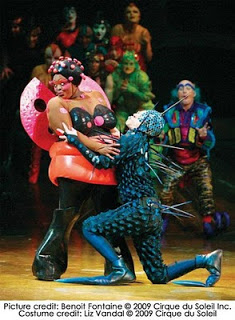