We’re always skeptical when a successful restaurant group branches out into a new type of restaurant.  Too often we’ve seen incredibly successful organizations stumble when they try to translate their successful formula to an entirely different cuisine.

So we greeted the news of Coal Burger with a good deal of skepticism.  This small restaurant chain (the Woodlands location is their third store, and their first outside of Arizona) is owned by the same group as Grimaldi’s Pizza, the iconic Brooklyn pizza joint that has branched out into locations all over the nation (and not coincidentally, right next door to Coal Burger.)  Would success in the pizza field translate into the highly competitive burger arena?

We aren’t sure.  But we love a good burger, and have a great deal of respect for the Grimaldi’s organization, so we visited Coal Burger today, on its opening day, to see just what they are all about.  It was a rainy Tuesday, so we headed down to Waterway Square in the Woodlands, and managed to snag a nearby parking spot.  We zipped through a building to avoid the rain, and came out across the street from the Coal Burger location.  There is no sign, but it is located on the back side of the same building that houses Grimaldi’s.

We crossed the street and entered the bright, airy restaurant.  We saw plenty of green-shirted staff members being trained on opening day.  Everyone was bright and friendly, and we learned quite a bit about the philosophy behind Coal Burger before we even ordered.

Coal Burger isn’t an ordinary burger joint.  There is a great focus on sustainable, high quality, healthy ingredients.  The organization is green, but it’s not pushed in the customer’s face as a self-conscious selling point.  We noticed that the disposable drink containers were compostable, the ingredients are from responsible sources like Niman Ranch, and little touches like LED light fixtures point to a thoughtful focus on the environment.  We applaud this approach.

Orders are placed at the counter, so we walked up and gave them ours. 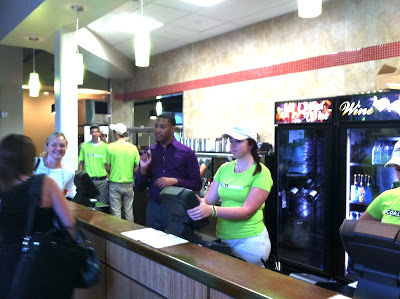 The woman at the counter was very friendly, and in short order we were headed to the table to await our Coal Burgers.  On the way we grabbed a soda – no Coca-Cola or Pepsi products here, but rather a selection of Boylan sodas, all sweetened with real cane sugar.  So we had to skip our beloved Dr Pepper, and instead chose Boylan Ginger Ale.  A sip confirmed that real ginger is a prominent ingredient in this beverage.

After a short wait, the burger appeared, wrapped neatly in paper.  Ours was a half-pound of all-natural Niman Ranch Beef, hand-formed into two patties, topped with American cheese, beautiful thick-cut bacon, shredded lettuce, and crisp sliced pickles.  Only the bun seemed pedestrian, but we later learned that a Brioche bun is available upon request.

Biting into this tall, narrow burger was delightful.  The first sensation was the crispness of the sliced pickles, which was quickly followed by a rich, charry, beefy burst of flavor.  Following the Grimaldi’s tradition, the burger patties are grilled in a coal-fired oven.

This magical device imparts a delightful char to the high quality beef.  And it does so quickly, leaving a nice juicy ooze and a pinkish center to contrast to the dark brown exterior char.

The American cheese we selected was thickly sliced and high quality.  The bacon had a slightly sweet, smoky bite.  The result was a superb rendition of a backyard burger, typically grilled over charcoal.  But this one was grilled over real coal, and the result was how one would dream a backyard burger would taste – no home cooked burger we’ve sampled has sported such an aggressive char and rich, complex flavor.

We realize that it’s unfair to judge a restaurant on its opening day, but we were very impressed by the burger at Coal Burger.  We were also happy to talk with Darien, the manager, and to see that he and his staff are very interested in feedback and focused on making the Coal Burger experience a good one.

UPDATE: We learn the secret behind Coal Burger 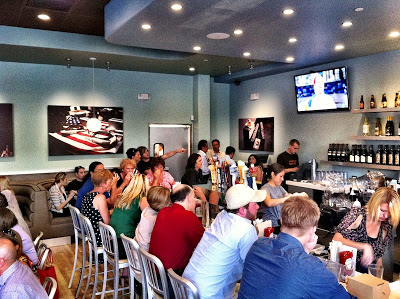 First Look Soft Opening of The Counter in the Woodlands 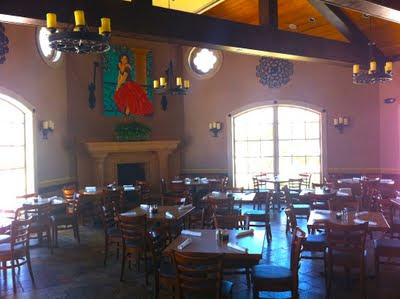