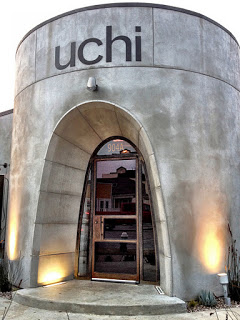 Lately Houston has been the recipient of some notable Austin imports.  On the moderate end, the insanely popular Torchy’s Tacos opened their first Houston location to rave reports from diners.  Today we were fortunate enough to take a look at an even more exciting Austin import.

Uchi, the modern Japanese restaurant building a national reputation for its innovative takes on sushi and other Japanese dishes, has opened a Houston outpost.  Located in the old Felix Mexican Restaurant location on inner Westheimer, the team from Uchi has converted a revered house of Tex-Mex into a lovely and serene Japanese dining experience.  How does the innovative cuisine of chef Tyson Cole survive the trip down Highway 290?  We wanted to find out.

We were invited to sample several of their dishes at a recent media dinner, and while this isn’t a formal review, we wanted to share our impressions.

Approaching the building, we noticed how the new building doesn’t eradicate the old architecture of Felix’s, but rather pays homage to it.  The iconic curved windows remain, and their shape is echoed in the striking new entryway.  The result is urban and modern, but with respect for the past, a theme that was echoed throughout the evening. 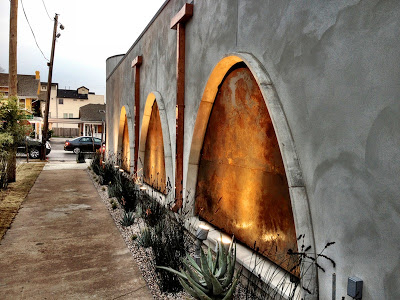 Entering the restaurant, we were startled at the transformation.  Gone was the Felix experience, and in its place was a stylishly rustic Japanese setting, with clever details everywhere we looked.  One of our favorites was a large communal table, handmade in Austin and lovingly assembled. 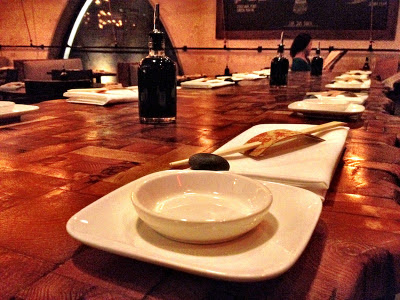 With this much attention and respect paid to the setting, we couldn’t wait to sample Tyson Cole’s food.  Before being served, we browsed the traditional preparation area, and took in the mouth-watering displays of fresh fish and other ingredients, all under the watchful eye of Uchi’s kitchen staff. 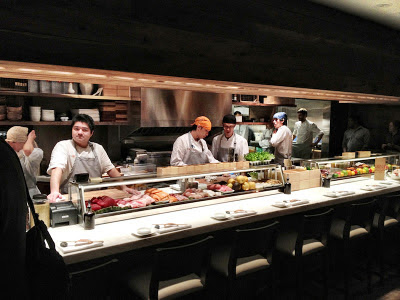 Watching these masters wield their tako hiki and santoku was like watching surgeons at work.  The speed and precision evident in their work was remarkable.

For this media dinner, small plates were passed by the attentive but unobtrusive staff, who were happy to answer any questions.  Chef Cole circulated from time to time, delivering food himself and anxious to hear feedback from patrons. 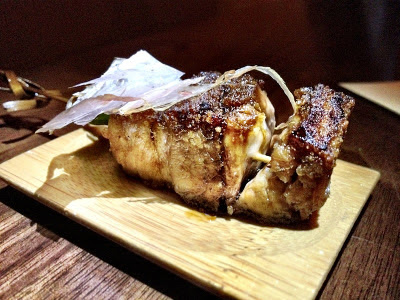 First up was a cooked dish – bacon sen.  Consisting of grilled pork belly, green onion, fish caramel, and bonito flakes, the result was a very restrained take on pork belly.  Instead of the often overwhelming richness from this fatty cut of pork, the dish had a solid pork flavor, still rich but balanced by the sweetness of the caramel and the subtle crunch of the bonito flakes. 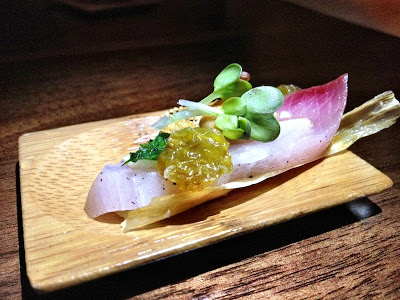 Next was our first bite of Chef Cole’s sushi.  Called machi cure, it begins with smoked baby yellowtail, presented on a small plank of edible yucca crisp, asian pear, marcona almond, and accented with garlic brittle.  This dish was genius.  The essence of the sea brought forth by the impeccably fresh yellowtail was firm without being chewy, and offset by the crunch of the yucca and the subtle snap of the almond.  The flavors danced on the tongue – the rich tuna, the sharp garlic, the tang of the pear, the earthiness of the almond.  The result was spectacular, and speaks to Cole’s ability to balance flavor and texture while not compromising on the jewel-like presentation. 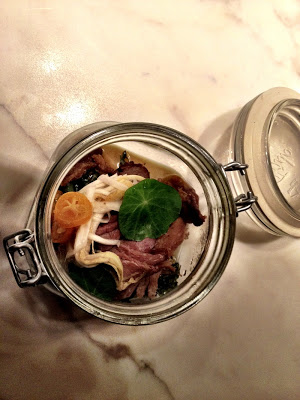 Another highlight was the playfully named Jar Jar Duck.  Presented in a lever-sealed Mason jar, opening this clever package released a waft of rosemary-infused smoky duck essence.  Digging into the jar revealed thinly sliced sweet kumquats, pickled endives, thinly sliced bits of roast duck, and crunchy duck cracklins.  Again, the attention to detail is remarkable: The duck is layered so that the milder white meat is below the richer dark meat, so the heavy, flavorful juices marinate the breast meat.  This dish evokes the cleverness of Grant Achatz at his best while leaving behind the fussiness that turns food into performance art.  Again, it’s about balance, and Tyson Cole pulls it off masterfully.

We sampled several other dishes that we thoroughly enjoyed, with interesting ingredients like flash-fried kale, toasted milk, and espelette, a mild French pepper not typically associated with Japanese cooking.  This medling of ingredients brings a distinctively modern feel to Cole’s Japanese cuisine.  The respect for the past is evident, but the vision is through a distinctively modern lens.  We’re excited about Uchi, and we look forward to seeing what other delights Tyson Cole and his talented staff have in store.

(Other views on the event, from Almost Veggie Houston, CultureMap, Dr. Ricky and Hank on Food.) 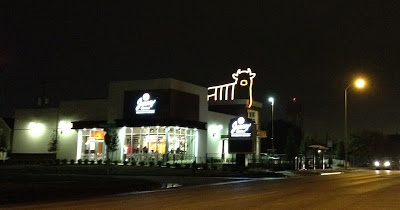 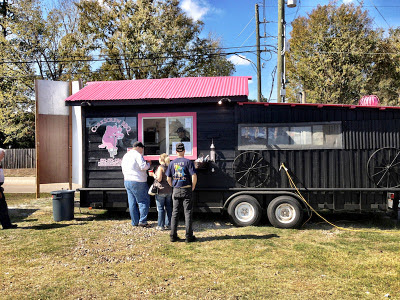 First Look Corkscrew BBQ – A BBQ Truck in The Woodlands…
3