Stepping Outside the Box at Crust Pizza

Even if you love to try new things, it’s easy to fall into a rut.  For years I was in a pizza rut – every time I’d order a pizza, pepperoni would be the key topping.  Sure, I’d occasionally augment things with some Italian sausage, onion, or bacon, but it wasn’t a pizza for me without pepperoni.

Crust Pizza changed all that for me.  Just before the grand opening I stopped by to see how construction was coming, and Clint Price, one of the partners, offered me a peculiar looking slice to sample.  There was no pepperoni to be found… heck, there wasn’t even any red sauce.  But it was delicious.  The pizza was later named The Jerk, and it’s become one of my favorites.  Jamaican jerk-seasoned chicken, caramelized onions, a variety of peppers and chunks of bacon are scattered over cheddar and mozzarella cheese stretched over their delicious crust.  A tangy Jamaican jerk dressing replaces the red sauce.  It works.
Later Clint devised the Old Smokey, another unique pizza that isn’t based on the traditional red sauce.  It’s become another favorite of mine.  Spicy link sausage and jalapenos, a tangy ranch dressing and smoked mozzarella cheese are the dominant flavors.  Again, unusual for a pizza, but the result works.
Yesterday I noticed a new monthly special pizza, and it’s perhaps the most creatively bizarre option yet.  Called the Mr. Potato Head, it features an ingredient I’ve never seen on pizza – Idaho potatoes.  I’ve learned to trust Clint, so promptly ordered one to test out. 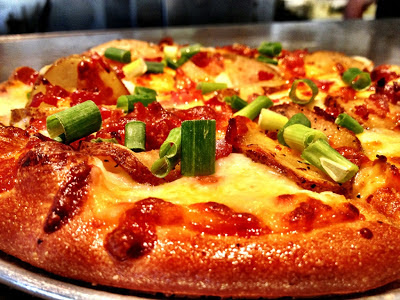 What arrived again changed my perception of pizza.  Bits of bacon are the only meat topping.  Prominent atop the alfredo sauce, mozzarella and cheddar cheeses are thin slices of Idaho potato, accented with said bacon bits and fresh chives.  It’s a slightly Italian spin on baked potato skins, but much lighter and with the richness of the alfredo sauce making this an indulgent choice.
Tags: area.woodlandsfood.pizzareview
Share 0
Tweet 0
Share 0
Share
Share

Stepping Outside the Box at Crust Pizza 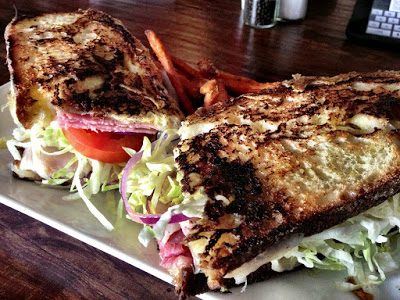 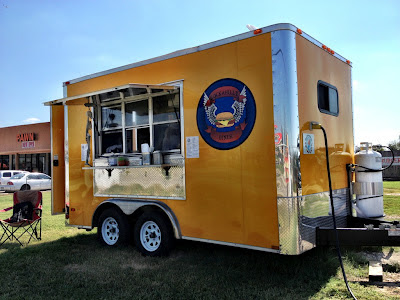