Many of our readers are familiar with Corkscrew BBQ, the food trailer that serves some of the best BBQ in the entire Houston area. They’ve had universally good reviews, including a rare two-star review from The Houston Chronicle’s Alison Cook. They’ve been so successful that they’ve had to expand from their original pit to a higher capacity model, and from their small food trailer to a modern, larger trailer. Even with these expansions, they still sell out of their BBQ every day. Rain or shine, in hot or cold weather.

Just about everyone who’s been to Corkscrew loves ’em… with one notable exception. There’s another BBQ place, called Pit Master BBQ, that’s in a shopping center on the main road near Corkscrew’s side-road location. Unlike Corkscrew, Pit Master is a full restaurant, with walls, air conditioning, restrooms, and all the other accoutrements that come with a brick-and-mortar shop. Yet they don’t seem to be able to compete with the little BBQ trailer. It’s a classic David-vs-Goliath story, but instead of David being armed with a slingshot, he’s got BBQ meats as his weapon of choice.

Pit Master is only lacking two things: Great BBQ and a sense of ethics. I’ve eaten at Pit Master a couple of times, and found their food to be utterly unremarkable – the type of corporate BBQ that’s available all over the place, and simply isn’t memorable. Until Corkscrew opened, Pit Master was the only BBQ spot in the area, and without competition their unremarkable BBQ wasn’t a serious problem.

Apparently the appearance of a master pitmaster like Will Buckman upset Pit Master’s apple cart, because according to reports, Pit Master’s owners have tried to get Corkscrew BBQ shut down. Repeatedly.

Nichole Buckman, one of the owners of Corkscrew BBQ, shares the sad tale on her Facebook page:

“Well we are working on going permanent, starting the processes this week. We’ll be staying in the same location in the trailer, we’ll be getting bathrooms put in and we’ll be able to sell beer and wine, yea!

“Everyone can thank Pitmaster BBQ for that…why you ask? They decided to go to the commissioner and try and have us shut down for having a pit room and canopy that was APPROVED but not written in the laws of having a food truck. So all those still frequenting them, this is how they treat other local family owned business, they try and shut them down bc they are loosing business, which has NOTHING to do with us but all with the quality of their food.

“I wish they would think that when they try and shut us down they are potentially taking the roof over my kids heads way, food from their mouths and clothes off their backs. I would never do that to a person, its shameful. We will not be bullied by them, it’s not the first time they’ve been trying to shut us down since we opened.”

We make no secret about being fans of Corkscrew BBQ and their world-class food. And we applaud Nichole’s positive attitude, and her drive to make her business even better. Corkscrew is a perfect example of how hard work, customer service, and dedication to a superior product will enable a small business to thrive, even in a tough economy.

We hope Pit Master tries a new approach – serving better BBQ, as opposed to whining to local government to get a family business shut down. Until that happens, we ask each of our readers to ask themselves what sort of business they’d like to support.

And we welcome a rebuttal from Pit Master in the comments. We’d love to hear your side of this sordid story. 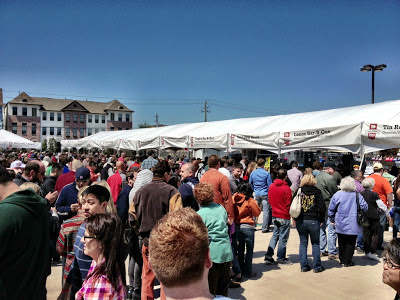