As the Woodlands grows, many new burger concepts are moving into the area. But savvy locals know that burger joints aren’t the only place to get great burgers. Many of the higher-end restaurants offer burgers on their lunch and dinner menus, but they’re rarely the focus of the establishment.

Hubbell & Hudson Bistro is different. Executive Chef Austin Simmons is no stranger to high-end cuisine, creating composed entrees that have garnered recognition from savvy diners and critics alike. We think he’s the most talented chef working in the Woodlands today, and that his dishes can hold their own against anything you can find in the Houston Area.

But Chef Austin’s culinary attention isn’t restricted to his superb entrees – the chef has a love of excellent burgers.

What happens when a classically trained chef devotes his refined palate and considerable talent to creating great burgers? Over the past few years we’ve been extremely impressed by the creations of Chef Austin, first in his tenure at the late, lamented Tesar’s Modern, and more recently in his position as executive chef at Hubbell & Hudson.
For this chef, burgers are more than an item on his menu. They’re a passion. Talking with him about burgers, his eyes light up just as they do talking about the exotic tasting menus he devises to satisfy his most demanding guests. The same attention to detail, and the same quest to source the highest quality ingredients is present here, and that’s a rare thing in the world of burgers.
And unlike some chefs who develop one impressive burger and rest on their laurels, Chef Austin is constantly experimenting with new creations. The best ones appear on his seasonally-changing menus at the Hubbell & Hudson Bistro. Knowing of our love for burgers, the chef invited us to sample his latest creations.
First up was Chef Austin’s latest take on a classic cheeseburger. Dubbed the New Bistro Burger, it’s a half-pound patty of ground sirloin topped with aged Vermont cheddar. (As we’ve heard from both Chef Austin and Chef John Tesar, if you’re not going to use a high quality cheese on a burger,  don’t use any cheese at all.) The burger is dressed with thick-cut applewood smoked bacon, bibb lettuce, oven dried tomatoes, and served on a challah bun. 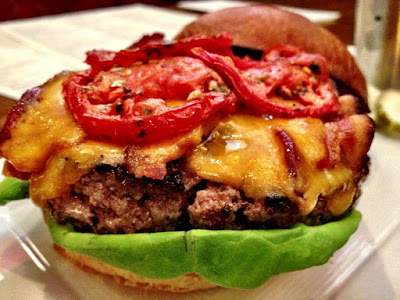 Biting into this burger we were hit first by the rich beef swagger. Cooked a perfect medium rare, and oozing succulent juices , the flavor of the sirloin was accented by the creamy beautifully melted, slightly sharp cheddar. The smoky bacon was a superb counterpoint, and the slightly chewy texture contrasted well with the soft, tender beef. We’re not usually a fan of tomatoes on burgers, but the chef’s oven-dried examples brought a bit of acidity and tang to the burger without adding too much moisture. All the flavors were in harmonious balance – each spoke with a distinct voice. In summary, the New Bistro Burger is a perfect example of a classic burger that’s been crafted by a focused, talented chef. If you enjoy a classic bacon cheeseburger, this may very well be the best one you’ll have ever tasted.
The second creation was as exotic as the first was traditional. The Sirloin & Braised Short Rib Burger is built around (not surprisingly) a patty that is a blend of ground sirloin and braised, shredded short rib. Cheese isn’t a part of this creation – instead, the desired creaminess is derived from a petite slab of seared whole foie gras, skillfully cooked and sporting a gorgeous sear. Bacon is replaced by 600-day aged Numero Uno proscuitto, and the greenery is unique lemon-accented arugula. The burger is dressed with a subtle mushroom puree. On the side is an ounce of a port demi glace that can be added at the diner’s discretion. Add it. 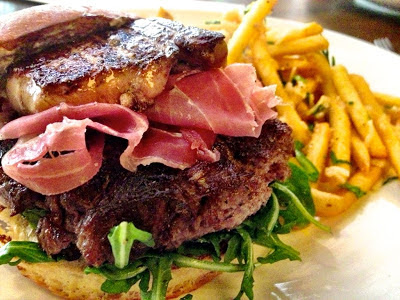 If you don’t like to sample burgers that are beyond the range of the traditional, stick with the New Bistro Burger. But if you venture out to enjoy a bit of culinary adventure, you will be amply rewarded by this burger. The complex, earthy flavors from the sirloin/short rib patty combine with the smooth, buttery richness of the the foie to create a lush base, and the aged proscuitto brings a slight hint of saltiness and sweetness, and the more elastic texture creates a substantial mouthfeel. The meat is moist and tender, but not oozing in great quantities, no doubt attributed to the less fatty short rib.

The smooth mushroom puree provides a contrasting sort of earthiness, and the sharp, bright flavors of the lemon-infused arugula combine with the acidity and tang of the port demi to create powerful high notes that balance the deep, earthy character. This decidedly untraditional creation is a lush, powerful burger, with a symphony of distinct flavors, and the sum is considerably greater than each of the excellent ingredients that Chef Austin has combined.

Many chefs add high-end burgers to their menus, with varying degrees of success. We’d place Chef Austin Simmons’ burgers alongside the best elevated burgers we’ve ever enjoyed, those of chefs like Daniel Boulud, Hubert Keller and John Tesar. Each of these talented men puts his encyclopedic culinary knowledge behind each burger he designs, and burger lovers owe it to themselves to sample their creations to experience just how superlative a master chef’s burger can be. Houstonians are lucky that Hubbell & Hudson Bistro doesn’t require a plane ticket as a prerequisite for this culinary experience.
Hubbell & Hudson Bistro | 24 Waterway Ave | The Woodlands, TX 77380 | 281-203-5641 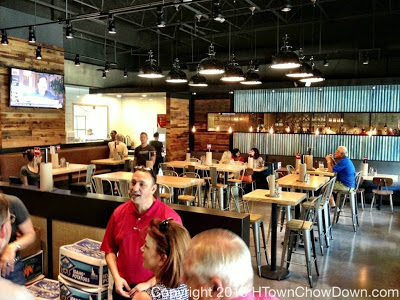 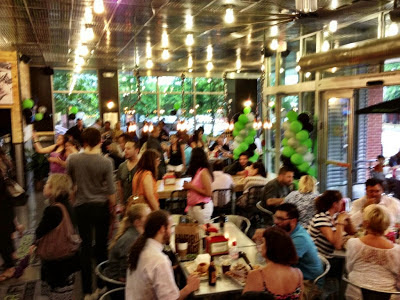