12 Ways to Tell that You’re a Woodlands Area Foodie

Out here in the Woodlands we’ve got more than our share of foodies. No matter where you go, you overhear people talking about food: What’s the new hot place, what’s about to open, where’s the best place for a steak. Some even take photos of their food.

But folks who say these things could be anyone… not necessarily a real foodie. As a public service, we’d like to humbly offer the following list to help identify real Woodlands Area Foodies:

Your friends message you when they can’t decide where to eat. They may or may not invite you to come along.
Cary Attar greets you by name when you walk into Fielding’s. You don’t expect him to feed you for free.
Your iPhone’s camera roll contains more photos of your meals than of your kids.
You first noticed Chef Austin Simmons when he was the sous at Tesar’s. And you happily devour whatever he’s offering as a special that night at Hubbell & Hudson Bistro. You don’t expect him to feed you for free.
You belong to three different Facebook foodie groups, but only admit to two of them.
You find yourself at 11pm driving across Houston to a restaurant where you won’t speak the language just because Tom Nguyen said that the food was superb. As always, Tom was right.
You know whether Phil Nicosia is in the house at Pallotta’s before you walk in the door. You don’t expect him to feed you for free.
You get sad thinking about Jay Stone’s late, lamented Wicked Whisk food truck. But you cheer up after you pledge your support for his Chingu project.
You have no problem having lunch at Twin Peaks, but you wouldn’t set foot in Hooter’s or Bikini’s.
You see nothing wrong with having a second lunch when friends message you from Hello Taco. Or a third when they’ve ventured down the street to Viva Itacate.
You get excited to find a great new place for chicken fried steak in the Woodlands. But you hold off visiting until Kim Bellini states whether the cream gravy meets with her approval.
You run into at least four friends on Saturday morning waiting in line for Corkscrew BBQ to open. You don’t expect them to feed you for free… but you enjoy the free beer they’re providing.

12 Ways to Tell that You’re a Woodlands Area Foodie

Feature Why are you out of BBQ at 2pm? 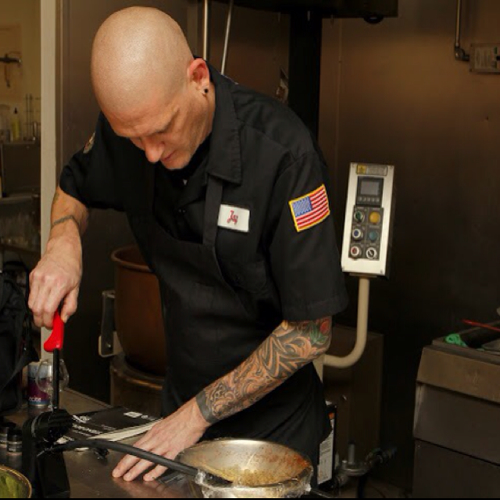 Feature Woodlands Chef turns to Kickstarter to Launch his …
3