On the monthly visit to Sam’s Club, we noticed a new eatery in the Portofino shopping center, across the freeway from the Woodlands.  Called Wahoo’s Fish Tacos, it’s a West Coast (in this case, California and Colorado) fast casual chain offering a variety of Cali-Mex dishes in a faux surf-shack setting. 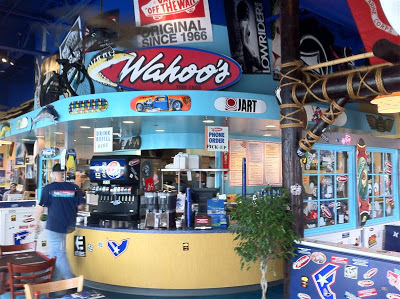 More than anything, it reminded me of Chuy’s Hula Hut in Austin after being run through the corporate concept machine.
But how about the food?

We decided to sample the fish tacos, which is their signature dish.  The very personable counter guy took our order, and withing five minutes this came out: 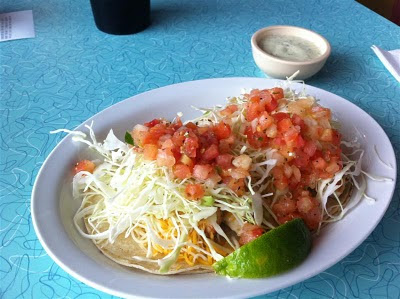 That is a lot of salsa (which in this case means marinated tomatos) and shredded cabbage.  We’re pretty sure there’s fish under there somewhere.
Biting into it revealed that there is, in fact, fish involved.  But it was dry, bland, and not terribly flavorful.  The suggested creamy cilantro sauce didn’t do much to help, either, although it would have been nice on chips (of which none were offered.)
Bottom line:  If you’re craving a fish taco, skip Wahoo and drive over to Berryhill on Market Street.

Uncategorized Best Burgers in America? In Houston, Of Course
Uncategorized Michael Dei Maggi is no longer with Caffe Bello
1