One of this burger lover’s saddest days of 2010 was the day that Tesar’s Modern Steakhouse closed in the Woodlands.  Tesar’s Magic burger had become the thing of local legend; to this day I’ve been searching for a burger that comes close to that remarkable creation.

But good things have followed for those involved with Tesar’s.  Chef Jeromy Robison landed the exec spot at La Colombe d’Or’s popular new CINQ restaurant, and has been on everyone’s short list of talented young chefs.

The other member of the dynamic duo, Chef Austin Simmons, was recently promoted to Executive Chef at Hubbel & Hudson, the hot gourmet market and bistro in the Woodlands.  Austin and I talked burgers on numerous occasions at Tesar’s, and I was excited to see how he’d influence the already excellent burgers at H & H.

So I was pleasantly surprised not only to learn of Chef Austin’s promotion, but to be invited to sample some of his new dishes on the winter Hubbell & Hudson menu.  And I was hoping a burger would be one of the offerings.

After rolling out several new dishes (which will be written about soon) a burger appeared.

I smiled when I noticed that instead of one of H & H’s excellent buns, Chef Austin had selected an English Muffin as the foundation for his burger.  The half-pound patty was hand-formed Wagyu beef, from an American breed of cattle that produces Kobe beef in Japan.  Instead of bacon, crispy prosciutto di Parma was artfully arranged.  Fresh arugula and a unique tomato remoulade were piled atop a sunny-side-up egg.  No ordinary condiments were to be found.  These prime ingredients do not result in a bargain burger – served with the excellent house cut double dip frites, the cost of the burger is $25, not an insubstantial sum.

(I hate to second-guess a chef, but I’m not an egg-on-a-burger guy.  When I mentioned this, the burger was whisked into the kitchen, and reemerged in short order without the egg.)

I bit into the burger, and it was a revelation.  Front and center was the lush, beefy flavor.  The wagyu had been expertly ground; so many times super premium beef doesn’t stand up well to grinding, but in this case it had been handled expertly and cooked to a perfect medium rare.  The juicy ooze was in full force; this was a rare case where wagyu beef delivered fully on its promise.

The tang of the tomato chutney was a delicious counterpoint to the swaggeringly rich beefy flavor, and this is coming from someone who typically doesn’t like tomatoes on a burger.  The smooth, almost sweet flavor of the cured prosciutto provided balance, and the subtle crunch added textural interest.

This could very well be the best burger I’ve ever tasted.

Chef Austin is still fine tuning the burger.  He’s contemplating a version replacing the egg with one of Hubbell & Hudson’s artisan cheeses.

I shudder to think about the difficulty in resisting the result. 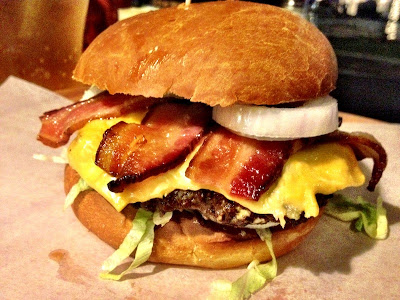 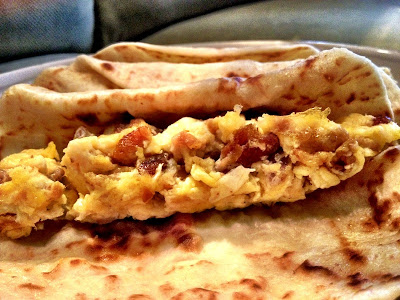