Growing up, I enjoyed burgers, but like many teenagers, considered them to all be pretty much the same.  Only when I moved up to Austin to attend UT did I begin to appreciate the differences between a good burger and truly exceptional one.  And on my frequent visits back to Houston, I’d often crave a burger.

On one trip, I was fortunate enough to stumble into the then-new Beck’s Prime, and I realized I had found a real Houston treasure.  Beck’s is a chain, but it’s locally owned and run; the opposite of an impersonal franchise.  And the burgers – thick, juicy, with quality ingredients and the mesquite-charred flavor that was anything but mundane.  Beck’s became my go-to burger place, and to this day remains my benchmark for an excellent burger.

I realized that I’d not visited Beck’s in months, and thought it would be the perfect way to kick of National Burger Month.  I met fellow burger aficionado Kerry Stessell (of Hot Line Pepper Products fame) at the scenic Woodlands location, ordered at the counter, and grabbed a table.

In short order our burgers appeared.  I went with the classic – a simple cheeseburger.  It’s a favorite of mine; the fresh veggies and American cheese compliment rather than overpower the lush mesquite flavor of the beef, and the freshly baked bun serves as a foundation to this formidable burger.

My companion ordered one of Beck’s signature options, Bill’s Burger.  It adds cheddar cheese, grilled onions, thick-cut bacon, and special Bill’s sauce to the Beck’s formula.  Here the sass of the grilled onions and the slight sweetness of the bacon combine with the mesquite-tinged beef to create a very satisfying combination.

Beck’s also offers a formidable ahi tuna sandwich among it’s non-burger offerings.  Heck, you can even get your choice of prime steaks… through the drive-through window.

A great burger or a prime steak through a drive-through window?  It’s things like this that make Beck’s Prime unique, and distinctly Houston.  It was a perfect way to kick of National Burger Month, and it’s one of the best burgers in town. 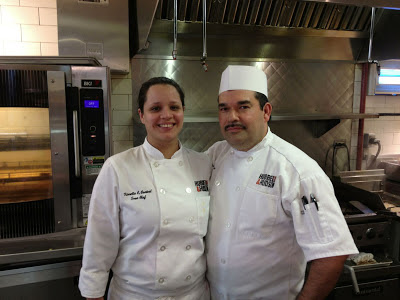